What Is Periscope and How To Use It? 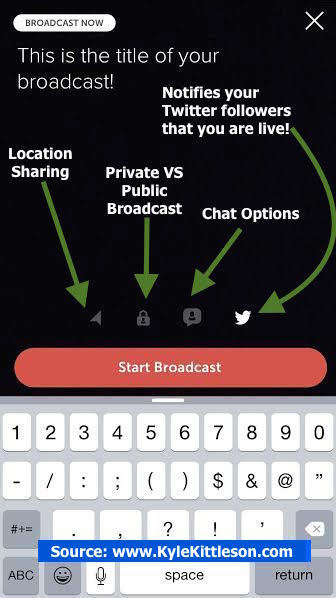 Periscope is the latest live streaming app that is sweeping the globe. Periscope allows individuals to broadcast directly from their iPhones. Viewers can watch, text questions, and give “hearts” to the broadcaster. Until now, social media could only document the past. Through apps like Periscope (YouNow, Meerkat), social media is documenting the present. I believe Periscope is the game changer many of us have been looking for.

Periscope, owned by Twitter (you’ve heard of Twitter, right?) launched in March of 2015. The closest competition is Meerkat which launched at the beginning of 2015. YouNow comes in at a close third. YouNow seems to attract a younger demographic – tweens and teens. All three platforms essentially offer the same thing – live streaming video. What separates Periscope is the cleanliness and sleekness of the app along with plenty of early adopters by celebrities. Andy Cohen and Anderson Cooper “Periscoped” or “Scoped” (the verb has yet to be determined) before their speaking tour in Chicago. Chris Hardwick, host of the Nerdist Podcast and Talking Dead, has been Periscoping everything from concerts to random walks down the street. Models, actors, and hosts have flawked to the app and the response has been positive. Guess what? People like seeing what their favorite celeb is doing right this minute.

In addition to celebrities, news stations have been using (and promoting) Periscope during their news broadcast. More and more people each day are being turned on to the latest in live streaming video.

Because the app is so new, information about how the app is doing is hard to find. At the time of writing (May 17th 2015) Periscope was the 151st most popular download in the iTunes app store. It has a 3-star rating with only 78 reviews. The day Periscope was released it had as many live broadcast airing as Meerkat (around 20,000). Sounds like a lot, but Instagram gets about 70 million new pictures posted each day and Facebook claims there are 750 million active users each day – source. So, Periscope has a long way to go before it is considered a social media mega platform.

You can call it a hunch or just a guess, but I think Periscope will be the next big social media platform. Just like many young people are opting to watch YouTube over traditional television, the rest of us may start choosing Periscope over our beloved tv shows. If this becomes the case…look out.

How Does Periscope Work?

1. The broadcaster downloads Periscope onto their iPhone.

2. They create their Periscope profile. This can be automatically downloaded from your Twitter profile or done independently. You do not need a Twitter profile to create an account.

3. The broadcaster then decides to “go live” and titles their broadcast.

4. The broadcaster’s Twitter followers are notified of the broadcast via a Tweet with the link to the live video feed.

5. Viewers click on the feed and can watch either on their desktop, tablets, or smart phones. Viewers may also find broadcasts by searching Periscope’s Global List of live video feeds, searching Twitter using the hashtag #Periscope, or using a third part site such as onperiscope.com.

What Happens During a Broadcast?

During a broadcast the broadcaster does their thing. Whether it be; talk, dance, cook, interview someone, sleep (yes, people Scope themselves sleeping), or whatever. Note: There is no pornographic material allowed on Periscope not even a mention of a link to an adult website like tube v japanese Sex is allowed.

If the broadcaster has allowed chatting during their broadcast, then viewers can say or ask anything they want via text. It is public for not only the broadcaster but the other viewers as well. This allows there to be interaction between both the broadcaster and the viewers.

The broadcaster is able to block viewers during a broadcast. This is usually done when a viewer is being rude or harassing other viewers or the broadcaster.

The “hearts” are Periscope’s version a Facebook “like” or a Twitter “favorite.” Viewers can give hearts during a live broadcast OR watching a past broadcast simply by tapping the screen. The hearts then float along the side of the screen before disappearing a few seconds later. The color of the heart matches the profile color of the viewer that is randomly assigned when a viewer “enters” a broadcast. Many viewers don’t like it when they get stuck with the brown hearts.

Why Do Hearts Matter?

You know how you probably wouldn’t follow someone on Twitter who only had 11 followers? The same psychology is working on Periscope with hearts. The more hearts a broadcaster has the more he/she is “loved” by their viewers. Hearts = Awesome.

Additionally, Periscope is always updating their list of “Most Loved” users who have recently obtained a large number of hearts from a Broadcast(s). If you get on this list then you are more likely to be found by other ‘Scopers.’ It’s marketing, people. You want hearts.

The Broadcast is Over. Now what?

A) Save the broadcast to Periscope.

B) Save the broadcast to their Camera Roll.

You can follow Kyle Kittleson on Periscope by clicking here!