I Got a Ketamine Infusion Treatment for Depression 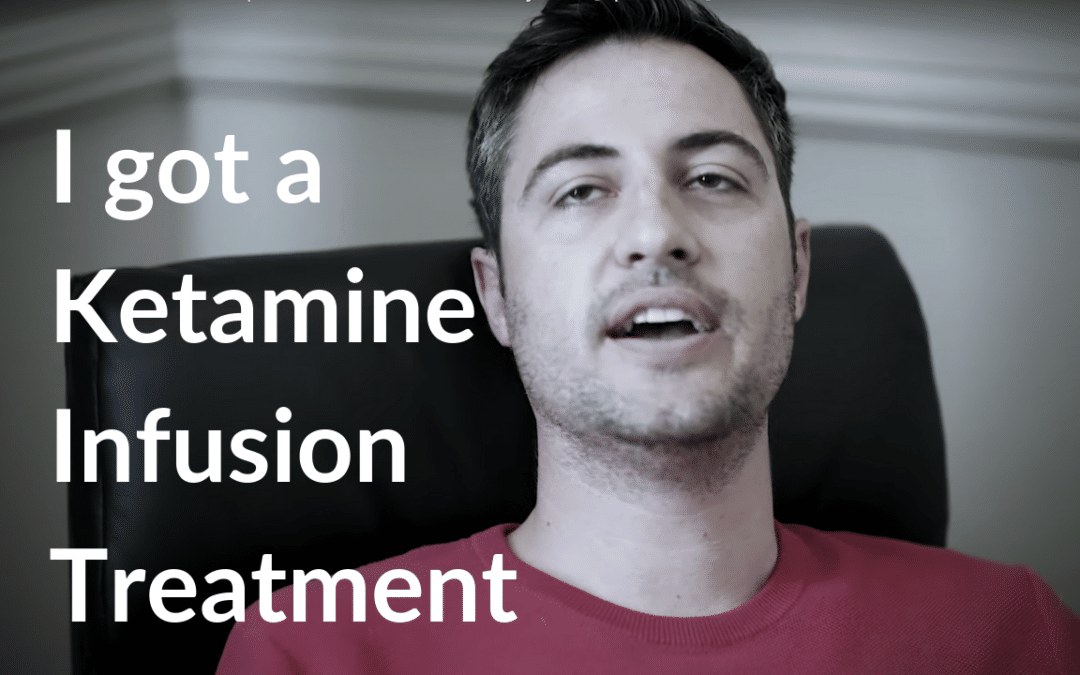 I Believe I Was Born With Depression

I have a vivid memory of running into the kitchen in tears, screaming, when I was 9 years old.

I opened a drawer and pulled out the biggest knife I could spot. Before I could make another move my mother slapped my hands and the knife fell to the floor.

I just screamed and cried in my mother’s arms.

That same year I was taken to a psychiatrist, diagnosed with depression and put on the liquid form of Prozac. I remember standing over the sink each day with my mother and having her place a syringe full of this awful tasting liquid in my mouth.

I would swallow and spend the next 5 minutes washing my mouth out with water. It tasted so bad.

About a month later I felt better – great, actually. Before I felt like I had sand bags on my back, weights tied to feet, loud speakers at full volume in my head, and people in my life who had no idea how to help. After a month of daily syringe sessions, I felt like the sandbags were gone, the weights were destroyed, the speakers were muted, and the people in my life instantly became kind, empathic, fun, and supportive.

At some point I went off the Prozac and was fine for awhile. But, when I was in my twenties I had my first breakdown and major panic attack.

Luckily, with supportive friends, family, and my now ex-partner, I got back into therapy, back on medications, and started living a good life.

I am now 33 years old. I take my medication consistently and as fate would have it, I work in the mental health and wellness space.

Then, this year, I heard about IV ketamine as a treatment for treatment-resistant depression. I had been struggling with my depression despite being on traditional medication.

After consulting my therapist and psychiatrist – I decided to give ketamine treatment a try and share the journey with the What’s Working viewers in order to show people what ketamine infusion treatments are all about. (The What’s Working show is my dog’s wellness show that she allows me to co-host with her. ?)

I discuss the ins and outs of my ketamine infusion treatment at the bottom of this article and in the video above, but first, let’s talk about what ketamine is and how it is being used to treat depression, anxiety, and other ailments.

Ketamine was first discovered in the 1960s and has been used as an anesthetic on battlefields and hospitals for decades. If you’ve had a surgery in a major hospital, the chances that you have had ketamine are high.

According to YaleMedicine.com, “Interestingly, studies from Yale research labs showed that the drug ketamine, which was widely used as anesthesia during surgeries, triggers glutamate production, which, in a complex, cascading series of events, prompts the brain to form new neural connections. This makes the brain more adaptable and able to create new pathways, and gives patients the opportunity to develop more positive thoughts and behaviors. This was an effect that had not been seen before, even with traditional antidepressants.”

In the video above you learn about my experience from a ketamine infusion. This 40-minute IV treatment delivered a low dose of ketamine into my bloodstream. This type of treatment is not FDA approved and therefore not covered by insurance. However, in March of 2019, the FDA approved a second type of ketamine treatment called Esketamine, which is delivered to the body as a nasal spray.

While patient testimonials and early studies are promising, there is still side effects to be aware of and more studies to conduct, as this Harvard Health article points out.

MedCircle Certified Educator and double-board certified psychiatrist, Dr. Domenick Sportelli, explains the science behind ketamine better than I ever could. Take a watch/listen to this video:

I received my ketamine infusion at Pacific Ketamine Clinic. At no point during my treatment did I feel anxious or scared. In fact, I felt very “at home.”

While the treatment was approximately 40 minutes long, it felt like no more than 5. When the doctor came in to let me know it was over and that I was going to “come back” to the real world, I felt like we had just started.

I did not hallucinate or see anything that wasn’t there. However, objects in the room and the walls of the room did seem to bend and become distorted to a degree.

I wasn’t scared at all – Since I was well-aware that I was undergoing a ketamine infusion, I was able to understand that the distorted images and walls were simply a side effect of the medication.

There were some major realizations that I will do my best to explain. It’s important to note, that this is how I felt during the ketamine treatment – not necessarily how I now view my life at every moment.

Worrying is such a waste of time.

There is a soul and it is separate from our bodies.

If my soul was a dog, my body was a leash.

A few times, I remember really trying to move into that exciting, new space, but my physical head would jerk me back closer to the world we inhabit with our bodies. It almost seemed like there was another world that we are also a part of but do not realize it in this physical form.

Again, none of this was scary. But it wasn’t what I would consider “thrilling” either. It didn’t feel as though I had just discovered something new. It was more that I had found something I had lost a long time ago and had forgotten about over time.

The entire experience was all very calm, peaceful, and ironically, a grounded one.

We are all connected.

In this world, we look at our physical bodies with such distinct separation.

This is me. That is you. She is over there. He is over here.

We separate people by race, gender, age, location, education, jobs, family role, name, etc. As a species we love to separate all of us into these incredibly specific boxes.

Think about how we describe ourselves when asked.

“Hi, my name is Kyle Kittleson. I am a male who is 33 years old living in California. I work at MedCircle.com and I have a dog named Callie. I like sushi and love to watch Netflix.” That’s such a specific description on who I am. We all do this.

During the ketamine infusion treatment, I was none of those things. I was just a being. A being that was a part of a world where we are all just beings and all connected through some indescribable force. And if we are all connected, then there is no difference between me and you and you and anyone else.

This understanding of that connection was so powerful that the physical part of me felt emotional at all the turmoil people experience because it isn’t just their turmoil – it is all of ours. It is ours…together, as one.

Immediately after the treatment I felt tired and lightheaded. I felt as though I had held my breath as long as I could and then finally exhaled. It wasn’t necessarily a pleasant feeling, but it was far from unbearable.

The next day I was tired, but nothing too abnormal.

Part of the treatment included participating in moodmonitor.co – a text messaging service that asks you each day, “How are you feeling today? From 1 (bad) to 10 (great)”

I have answering this question each day at 1pm PT. Here is how I have faired since the ketamine infusion treatment:

What’s most notable to me is that I had three days of 10/10 days – very rare for me. After three days, I had a substantial drop and have hovered around the average number of about 6.

I do credit my three days of straight 10s to my ketamine treatment.

Pacific Ketamine Institute suggests doing six 40-minute ketamine infusions over a 3 week period of time. They say results will last up to 6 months.

It’s worth referencing how different people have different tolerances – for example the ketamine hit me more quickly than you on the day of treatment, and the effects were longer-lasting.

What Do I Believe?

Now, outside of my ketamine state do I believe that worrying is dumb, that the soul and body are separate entities, and that every human on Earth is connected through some complex system we can’t see, touch, or prove with modern science?

I think any of those questions or theories are too complicated to answer definitively.

However, to experience those intense feelings of “knowing,” even if it was just during that 40-minutes, gave me some peace and understanding that would be difficult to get elsewhere.

I believe ketamine helped me understand myself and our connected world better.

I believe ketamine is a treatment option that some people should consider.

How Much Do Ketamine Treatments Cost?

While costs vary depending on the clinic, Pacific Ketamine Institute, charges $650 for each session and if you prepay for 6 sessions, they give you a discount.

Would I Get a Ketamine Infusion Again?

Would you get a ketamine treatment? Leave your questions and comments below!